Danganronpa 2 is a visual novel murder mystery game where you help solve the crimes. You're one of sixteen high school students stranded on an island, and you can't leave unless you murder another student and avoid detection. If someone can do that, everyone else remaining on the island dies and they can go free. But if you and the group successfully deduce the murderer, the murderer dies and the rest of you can continue to live to play this sick game.

SPOILERS for Danganronpa 2 below.

One underlying theme of the game is that your situation pushes you to a deep despair to allow you to enjoy a greater hope later on. The game presents this hope as vital to your continual survival in a world full of despair.

Not every religion sees hope as a virtue. Buddhists urge us to abandon hope or "give up all hope":


One of the most powerful teachings of the Buddhist tradition is that as long as you are wishing for things to change, they never will. As long as you're wanting yourself to get better, you won't. As long as you have an orientation toward the future, you can never just relax into what you already have or already are.

In Christianity, hope is a virtue. It's part of having faith to have hope that you will live after death, and assuming that Christianity is correct (that's where the hope comes in), that you will be forgiven of your sins and live eternally. In Danganronpa 2, Chiaki represents the Christian ideal of hope, especially since she saves the group from their deaths through her sacrifice and enables them to return to the world outside the game.

Chiaki is the "regular" flavor of hope, and Nagito represents the diabolical inversion of hope. Nagito is one of your fellow students who seems a little too enthusiastic about the death game. His idea is that by helping to make a completely hopeless or despairing situation, he can actually increase hope when such a situation proves fortuitous. 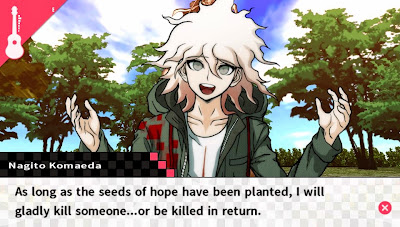 He attributes this twisted sense of hope to his "ultimate talent," which is that he is ultimately lucky. If he participates in a lottery, he'll win it. If he plays Russian roulette, he'll succeed at not shooting himself. 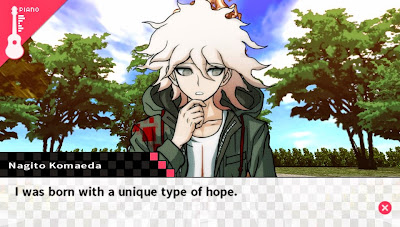 He orchestrates his death so that the murderer is random. Because he's ultimately lucky, the person he wants to kill him does so unwittingly. If you and your friends hadn't figured it out, he would have ultimately contributed to the deaths of everyone except the murderer. In this way he's also kind of an inverted savior figure, but he is unsuccessful. 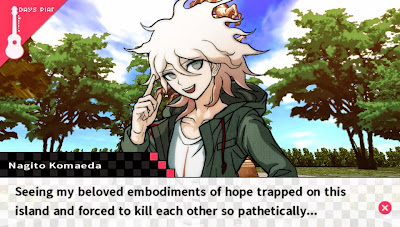 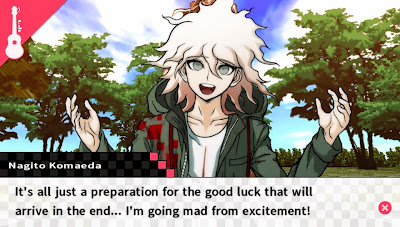 In the end, Chiaki does some kind of computer magic, and you're able to break free of the computer simulation and defeat the virus that represents ultimate despair. Why couldn't you go all super-powered earlier?

The way Danganronpa 2 ends, it seems like the authors are rooting for the "ultimate despair leads to ultimate hope" version of things (especially taking the original Danganronpa into account). It certainly makes for interesting, possibly benevolent motives on the part of the characters who set up the death games.

Certainly in Christianity, there's an idea that everyone goes through "trial by fire," or that the difficulties of life will make you into a more faithful person. But taken to an extreme, this idea is a little disturbing. If hard things in life can make you more faithful or even "better," why not cause other people to suffer so they can reach their ultimate potential? I'd like to think that Christianity has some safeguards against this, like commanding adherents not to murder each other. But what if it was all simulated suffering? Why not incite despair to create hope in a safe environment? Right now my best answer is "because that doesn't seem right, fun, or good" which is pretty unsatisfying. Thanks, Danganronpa 2, for making me think about these things.
Posted by Rachel Helps at 9:39 AM