Bastion is one of those little games that you kind of have to play to know what it's about, but I'll try to explain anyway. Gameplay-wise, it's an isometric action-rpg where you can change weapons, etc., and seems pretty normal to me. It's the story that makes this game worth playing. 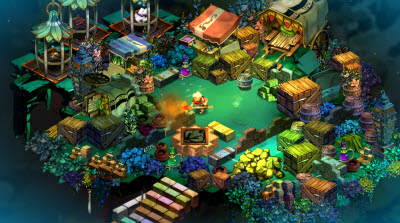 Warning: spoilers for Bastion ahead.


The cool thing about Bastion is that your narrator reacts to what you do--it really feels like he's watching. And he's... kind of unreliable. Not the first time there's been an unreliable narrator in video games, but I think it makes for a more exciting story. In addition, there's a gradually unfolding post-apocalyptic story where you find out the Calamity (apocalypse catalyst) was intended as a genocide of the Uras, a tribe of people your people didn't like, and that your narrator, Rucks, helped cause the Calamity.

You as the player must make two moral decisions at the end: the first is whether or not you save the Uran who betrayed you, the second is whether to restore the world to how it was (before the Calamity, where your life was kinda crappy), or do you try to make a better civilization with the friends you have?

I'm a gullible person and I was taken into narrator Rucks's story. I wanted to help him undo his mistake, when undoing the Calamity probably just took everyone back to their pre-Calamity states of generational hate. I thought about what my character would do when confronted with his betrayer and I thought that he wouldn't save him, especially if he has to leave behind his weapon in order to carry his body. I ended up abetting genocide without trying to be the "bad guy." Granted, at first, the game doesn't let you choose whether or not to kill the Urans--they will keep attacking you no matter what.

Over at Line Hollis's blog, she's been discussing if it's possible for a video game to be a tragedy--for you to choose the wrong ending without trying to be a "bad guy." And I think Bastion does a pretty good job. I feel like a complete jerk for undoing the Calamity. And even if you do choose to save betrayer-dude and stay where you are, you're still in a post-apocalyptic land where it looks like you're going to have a hard life. But at least you'll be atoning somewhat for the hatred of your people.
Posted by Rachel Helps at 10:28 AM