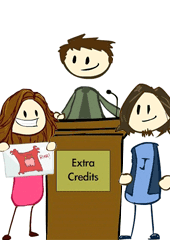 There's a game commentary cast/video thing called Extra Credits that some of my friends like. I watched a few episodes, and while I completely agree with most of the ideas, for some reason it annoys me. It's not aimed at people who are already caught up in video game philosophy, but for people who might not read the Brainy Gamer. If you've read a few books on gaming or have read any of the "brainy gaming" blogs, it's a given that we're tired of games that re-hash the same old ground only with prettier graphics than before (you know the type--you're usually a white male saving some helpless thing with a big sword or something).

I take it for granted that the people I discuss games with agree on a few things, like that women are often oversexed in games and it would be good to have more diversity in race, age, personality and gender in games, and that well-developed characters are superior to ones that are completely predictable and caricatured. We all know that games could use better writing and that it's an emerging art form, many facebook games are practically unethical in their hacking of human reward psychology, etc. It's hard for me to believe that anyone would disagree with these notions or even not think about them.

Still, the existence of a show like Extra Credits shows me that there is a large audience of gamers who doesn't automatically think of these issues and probably doesn't have a background in literary criticism, and don't mind being lectured  about why diversity and character development in games is important (I prefer a discussion format). I'm glad that there is a sort of middleground for them, appropriately pitched through Penny Arcade. I think that with the proper education, most gamers will agree that there is a great potential for games to be more awesome in the ways Extra Credits describes.