I've been searching the internet for a list to links of the indie games that were on display at Minecon, but I'm coming up empty-handed. So to make things easier for the world, I'll make my own list (I'll work off the indie theater schedule from the agenda, but I'm not sure if all the games were in it? And not all the games showing at the indie theater had displays, so, confusing). So, here's a buncha blurbs about indie games featured at Minecon.

The ones I saw/played:
Code Hero: A game that teaches you how to code. I love the idea; the game is still in development.
3D VVVVVV: Still difficult as heck. 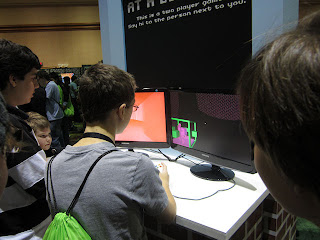 At A Distance: I didn't get a chance to play it, and I couldn't really figure out what was going on by watching. Lots of abstract shapes and two players having to work together to do... something.
No Time to Explain: Kind of a silly, cartoony platformer. I admit, I was kind of put off by the art style.
Catapult for Hire: Looked like a pretty straightforward 3D physics puzzler (but maybe everyone was playing tutorial levels?). I think it gets cooler later on with story and adventure elements.
Dragon Fantasy: JRPG in a retro style for iOS, kinda like Cthulu Saves the World.
A Valley Without Wind: A metroid-like with procedurally generated levels.
Retro/Grade: A rhythm shooter compatible with guitar hero guitars where you can go back in time.


All the others:
Snapshot by RetroAffect: upcoming game about taking photos which looks cute.
Octodad: 3rd-person adventure about being a dad? I'm downloading it now.
Here Comes Launchman: retro-styled platformer with things you can stick to and throw, maybe?
Airmech by Carbon games: some kind of 3rd person shoot 'em up
Influence: another one of these zen games where you build up your little sphere to consume all other things.
Incredibots: A machine building game.
Retro City Rampage: retro-styled action parody game.
Frozen Synapse: A tactical game that has been pretty popular and was featured in the last indie bundle.
Zombie Grinder: I think the title sums it up.
Jesus vs. Dinosaurs: Make cars with tetris pieces, then run them together to see who wins. Oh and the playable characters are Darwin and God. I can't tell if I should be offended or not.

If you had a game at Minecon, leave a comment and I can add it to the list. Also, if you'd like me to review your game, feel free to e-mail me.
Posted by Rachel Helps at 1:53 PM