The legacy of Princess Maker 2

As someone who helped write a game about parenting, I have opinions about parenting games. It's difficult to combine fiddly statistics with a narrative that gives a good simulation of both the day-to-day parenting decisions and an occasional event that feels like a pivotal moment, like how much dessert to give your child vs, deciding if you're going to force your child to take piano lessons. I'm on a quest to find and review all the parenting games that I can! I want to find the best parenting games and learn from their game design. 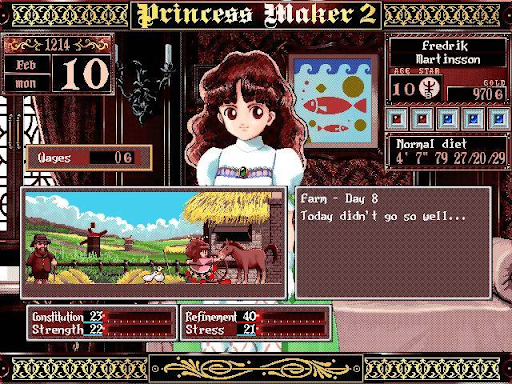 The first parenting game I ever played was Princess Maker 2 (1996). It's set in a medieval fantasy world where you become guardian of an 11-year-old orphan. You decide her schedule, where you can pay for her to attend expensive classes or she can make money by working. She can learn etiquette so she can properly greet the king's concubine, or she can work on a farm improving her stamina and earning money. She can study art and enter the yearly art contest, or hone her spiritual sensitivity while work in the graveyard. She can go to church and be pious, or work in a sleazy bar! Your daughter can also go out adventuring and either talk to or beat monsters she encounters in four different areas. I remember trying out lots of different ways of raising my child. Essentially, this game is a stat-cruncher and it's hard to feel connected to your daughter in the game. She seems more like a collection of numbers than a real person. Your choices for her schedule definitely affect her ending occupation and role in society, and there are many, many different endings. I would say that it's a classic that introduced parenting as a worthy game narrative to a western audience. The sequels were only recently localized and made available in the United States, although fans agree that Princess Maker 2 is the best of the series. You can play the original localization that wasn't sold in the US, or you can buy the remake on Steam. 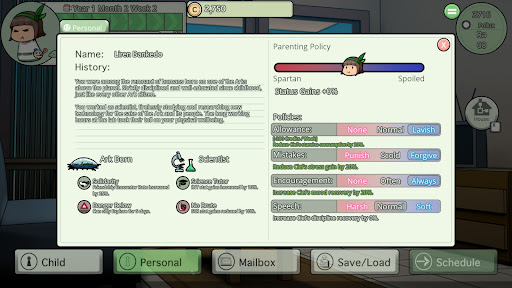 Ciel Fledge: A Daughter Raising Simulator is a direct descendent of the Princess Maker games, but there is a science-fiction setting and more things to fiddle with. You decide what classes your daughter should take and they raise various stats that she needs, and I think they affect the endings. Your daughter can make a lot of friends, and there is a mood system where your daughter will get depressed if she's too stressed out. Unfortunately, I didn't really like this game. Learning about how to battle felt like reading a textbook, and the writing was not compelling. If you've played a lot of Princess Maker 2 and want to see a different take on the stat-raising simulation, you might want to try it. It's on Steam. 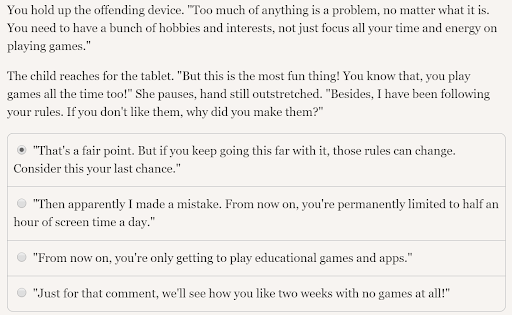 If you prefer an interactive narrative, The Parenting Simulator is a text-based game that allows you to make a few key decisions for each year of your child's life. Instead of just saying you're a permissive parent, like in Ciel, you have to actually role-play being permissive, which in the above scenario would entail letting your child have as much screen time as they want! The writing in this game is good, and if I have any complaints, it's that their pandemic year event was a bit TOO lifelike and brought me out of my games-as-escape reverie. At the same time, I had a hard time believing that letting my child stay up all night at her sleepover made her that unpopular. There are still stats in the background, although some reviewers complained that it's difficult to get different endings. As a game designer, I wonder if it's because you have the option of playing an abbreviated version of the game with only a few random events per year vs. playing every event each playthrough--having fewer events would be less opportunity to affect end-determining stats. 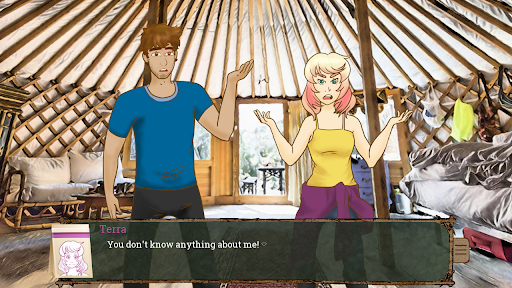 Of course, I'm not going to end a post about parenting without mentioning my own game that I made with my sister and sister-in-law, Space to Grow. Like The Parenting Simulator, we tried to focus on a few key parenting events each year. You also choose how much your daughter should help you with your farm. Your daughter has a definite personality! My family was speculating about how much she was based on my nephews and nieces. The game is set on a foreign planet, and you make decisions that affect your community as well as your family. I think we reached a good balance of realism vs. cool science fiction stuff. Let me know how you like the game if you decide to play it! It's available on Steam, itch.io, and Google Play.

I love parenting games! I'm hoping to make another post that includes Growing Up, Cute Bite, and My Child Lebensborn.