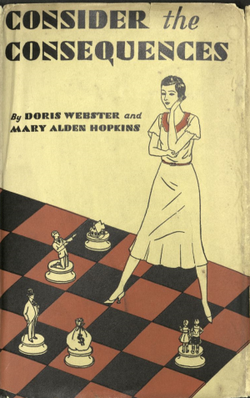 Consider the Consequences (1930) is considered to be the first game book. It has narrative choices that you make by flipping to a certain page to get multiple endings. I'm often more interested in the concept of a game book than actually reading it, but this one was surprisingly domestic and interesting. The three sections of the book let the reader make choices as first Helen, then Jed, and then Saunders. Each section starts with a node diagram of the available branches in that section. The book is co-written by two women, Doris Webster and Mary Alden Hopkins.

The characters and their situations reflect the cultural values of the 1930s, and it's a fascinating window into the social norms surrounding marriage, child support, investments, and other social topics. I found myself irritated when the book seemed overly concerned that my mother would be left at home with no one to keep her company, which is actually an important consideration, if you think about it. The men's stories similarly have the status of their mother's home to consider when investing or spending.

Helen's first choice is whether to marry the irresponsible son of a rich widow or not; if you marry him, you have a baby right away, but it turns out he's an alcoholic and his mother is emotionally dependent on him. Helen's choices are fairly broad. You can end up as a writer to a fancy magazine who falls in love with your editor, and you can choose whether to pursue an affair and ask him to get a divorce, pursue an affair an not ask him to get a divorce, or not pursue an affair. The results are fairly sensible. If you choose to have the affair without him getting a divorce, you have a little difficulty finding an apartment but have some passionate moments together and can't compete with his love for his children. You can also end up at home keeping your mother company! The book has a wry humor that comes out in the endings, which are a considered opposite to morale fairy tales, but definitely have a practical "morale." For example: "the consequence of Helen's choosing the prudent course was that she was safe." Or "the consequence of denying herself an unpractical romance or a broken heart was the discovery that she could love a second time as heartily as the first time."

The style of the book is matter-of-fact, and time passes rapidly between choice nodes. It was refreshing to be able to play a "romance" game book with such a variety of options, all of which were given due consideration, and the progressed so rapidly. While there were some old-fashioned values in the book, like when your character gets away with murder by revealing that the victim was in a romantic relationship with his wife, the available options and reflections felt surprisingly progressive. I highly recommend this early gamebook if you can borrow a copy.