Virtue's Last Reward fixes all the annoying things about 999

Remember when I was whining that visual novels should learn a thing or two from sequential art/comics? I think a designer over at Chunsoft must have felt the same way, because Virtue's Last Reward (VLR) solved most of the problems I had with 999. VLR is the sequel to 999 and is in the same genre: visual novel with periodic escape puzzles.

The worst thing about the writing in 999 was that it was redundant to visual information. It was like they were expecting a blind person to play the game and describing physical attributes and degree of passion on comments when we had a picture of the person and their expression to learn that from. Thankfully, VLR cut back on this annoying literary technique. It made the dialogue go by faster and helped it feel like a game where characters are talking to each other and not a novel being read to you.

By far my favorite part of VLR, which I think other branching stories should adopt, was the story flow chart. 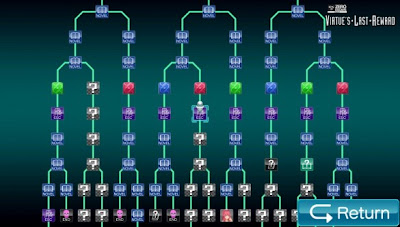 After you get one ending, instead of starting from the beginning and skipping through lots of text, you can go back to the last story-branching decision and choose the other option. Or you can go to some other branch and see how that part unfolds. You still end up skipping a lot of text, but compared to the alternative it is relatively painless.

The other nice part is that after you escape from a room once, you don't need to ever solve it again to escape. This feature isn't used very often though, because the designers made it so every single path has a different puzzle room to solve. So the writing is better and the branching story is easier to navigate.

Another aspect I liked was that the things you learn in some branches of the storyline unlock other parts. It made it feel more like you were building up to the "true" ending and less like you were just seeing all the possible endings. The fact that your character can sometimes remember things from other timelines makes this like... a modernist visual novel? Or you know, just ridiculous sci-fi. There are so many crazy reveals and it made me look forward to each ending. I can't believe I actually LIKED the ridiculousness of it all. I'm looking forward to the sequel.
Posted by Rachel Helps at 9:50 AM