For the last part of these series of posts covering indie game night, here's a quick rundown of the finished games I saw and played a little at home:

-Cardwood is a short experimental game Vazor made in two days. I played through it, and I'm not sure if I understand everything that's going on, but I like it. I like clicking on the buttons while I'm reading and trying to figure it out.

-Tile Factory, over on Kongregate, is a machine-building game with a factory theme. You have machines that duplicate tiles, conveyor belts, barriers, spray-painters, etc. It has a good tutorial and also tons of things that people who are really into building games like sandbox mode. Jon's working on a sequel which will have user-generated levels (and he's looking for an artist). Here's a screenshot: 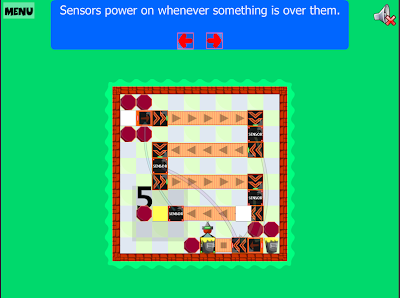 -Frayed Nights: The Skull of S'makh-Daon is a first-person party-based RPG in 3D. From the little I've played, I'm impressed with the depth of the combat (your rogue can disappear for a while and surprise the enemy) and the humor (to restore MP you can take an insta-nap potion). The game has an interesting mechanic where progressing through a dungeon gets you star points that can be used to regain health etc., but these points go away if you exit the game and load it later--incentive for a longer play session. I also like how your party members are actual characters who talk to each other, and their character designs reflect their personality. Also, battle seems to be dice-based, kind of like D&D? It's the accumulation of years of work by Rampant Coyote, and it's for sale over at his site, along with a free demo. Go play the demo and see if you like it! Here's a screenshot; the pus golems are the first monsters you meet in the temple to the god of acne and boils:

-Link REALMS is an isometric MMORPG in open beta, also a game that has been a long time coming. I believe I saw it last October and I can tell you that the enemy AI system is really cool and ridiculously complex. It has an Oblivion-like leveling system, so you choose your specialties based on what you do, not some arbitrary race or class. I like that kind of system but it does have the drawback of being somewhat grindy (okay, this spell has to fail how many times before I get to level 5?). I haven't been able to fully explore the world yet, but it looks like there are cooking and animal husbandry systems along with magic and mauling and clairvoyance (!). Take a look at their wiki to see if they implement your favorite skills. The click and drag system of inventory leaves me feeling a bit disorganized, but it works. They're still working out a few bugs, but it's highly playable as long as you can figure out the double-clicking and targeting stuff.

There you go! Two browser-based games for playing on your work break and two bigger games for multiple-hours-investment-fun, made right here in Utah.