Here's some information about the games in progress at the Utah Indie game night. Obviously, I haven't been able to play through each game, and most of my blurbs focus on the superficial. That's kind of how demos go. I'll have another post for the completed games (the ones I can play from the leisure of my home).

-Faerie Alchemy (play video; company) is falling-block puzzle game. Three or more adjacent suns turn into a leaf, leaves turn into blue pyramids, with new elements gradually adding themselves (the chain effect reminded me a little of Primrose). Ben had added some shiny effects that aren't in the video, and it looks very pretty. The game is pretty playable in both casual "this feels right" and intense "I'm thinking about every block" ways of playing. Ben's hoping to release it on iPad and then everything else.

-Multifarious is a game for mobile devices that is a tricky multitasking game. After balancing a ball on a seasaw through the magic of accelerometry, the game adds more and more tasks (touching the screen to jump at the right time, etc.) until you mess one up. Kind of like a cooking game, in that you have to keep track of multiple things at once, only a lot harder. I'm pretty sure this is their blog.

-Cthulhu Island, a Crysis mod, is a horror game with really good lighting (you use a flashlight to find your way, there are fires and things, it just looks good). I admit I am a complete sissy when it comes to horror games, and just watching someone play this game is enough to scare me. Josh and Michael have been working on it for years, and if you ever wanted an opportunity to slay Cthuhlu cultists, this might be your best chance.  Screenshot: 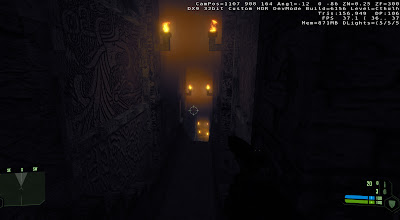 -March to the Moon is a top-down shoot-em-up with abilities and experience, set in a bar where you kill lots of rats to start out with. Curtis has been working on the graphics and it looks good (you can wear a skirt and hats!), and he's been working on balancing the abilities so it should be possible to get past the fourth boss. He's planning to sell it on XBLA. Here's a screenshot from a previous build: 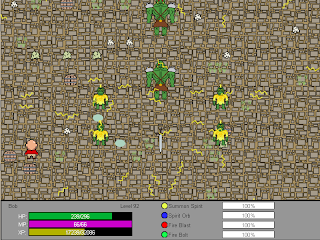 -Bullet Train Hill is a delightful little puzzle-platformer where you're jumping around on top of a bullet train, so the wind affects your jumps. I liked the levels I played, and I'd like to play more. Chris hopes to make use of the concepts in another game.

There were a few games I didn't get much information about. Smote is an old school action-RPG, from the looks of it, and has online multiplayer. I'm very curious about how that is or will be going. There was also a UVU flight simulator, which has local Utah geography, which I think has the potential to be uniquely Utah.