GEEX is a gaming and electronics expo in Salt Lake aimed at gamers and their fans, and a few people who like to make games (stemming from Utah's demo party, Pilgrimage). I went last year, but this was the first time I had been to a convention with an official press pass (it is basically an excuse for me to be friendly). 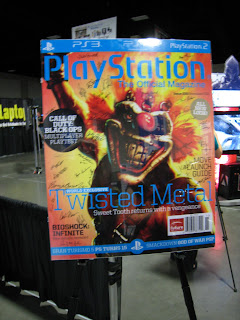 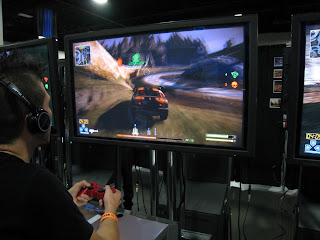 I got to play a little of Twisted Metal, a circus-dystopian themed car shooter coming out next year. It's not my kind of game, but it allows your car or helicopter to affect the environment, which is difficult to program and cool. There's also an ambulance car where you can release your old man in a gurney to be some sort of bomb, which struck me as extremely not cool (why not just make him a dummy and not perpetuate video game ageism?). 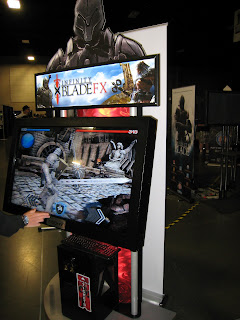 Infinity Blade, originally on the iPhone, is awesome on the big arcade-quality touch screen. It's refreshing to play a game that was obviously tailored to touch-screen capabilities. In this case, your finger slashes are sword slashes and you can parry, dodge, defend, and counter. It started out easy enough for me to quit before I lost, but the story has generations of the vengeful bloodline coming back with the game getting harder each time. They're using the unreal engine, and the characters are lifelike. I found myself feeling a little intimidated by my enemies' little challenge animations.

ChAIR talked about how they developed Infinity Blade; basically, they wanted an original game tailored to the iphone's playing experience. They make battles be intervals of two minutes, figuring that many people are on the toilet and after two minutes their legs will go numb. Just from their presentation, I think ChAIR is doing design right--they're thinking about their platform and user experience right from the start (or if they didn't, I think that's how good games should be made). They're not overextending themselves and concentrating on making good-quality stuff.

Now, enjoy a few photos of cosplayers (awesome Star Wars costumes courtesy of various companies) while I talk about one other presentation.
Roger Altizer's  presentation was also excellent (former games journalist turned U of U professor and game designer). He went over the basics of game design, which I've been studying, and it was fun to hear how he had to apply game design principles to a game for children with cancer. Physical therapists wanted the children to make certain movements, psychologists wanted it to help them keep a fighting spirit, and doctors wanted it to not be the wii, whose radio waves can interfere with hospital equipment. Sounds like a sonnet of a game structure to me!

I watched some of the Starcraft 2 finals and they were awesome. RGNPerfect (Protoss) and ePValkyrie (Terran), both top 25 (or 100?) players, went head-to-head in the last round. Perfect won one game with 4-gate and awesome forcefield micro. In the final round, he built an expansion before a zealot or cycore, right in front of the enemy scout! The shoutcaster was like "what?" Perfect scouted really late, and somehow knew that banshees were coming and built an observer. More awesome micro through his vulnerable period, and then he won! It was great to have a Protoss win a tournament (and wow, I don't know how sports journalists do it, it was more awesome than it sounds). If I can find replays somewhere I will post a link.

There was also a game-a-day competition, where programmers make a game in one day, themed around 8-bit, disease, and gems. My husband participated, and helped Bryan of smote.com make a top-down shooter (I think you can tell where their engine came from). The winning game was a two-player game where you try to pipette cells to make them your color. It's fun to see what people can make in one day, and many of the participants were familiar faces from indie game night.
Do you remember that poster of a bunch of pixel guys making up megaman? This one:
Turns out the artist is local!

Anyway, I could go on about university sponsors, but I just want to do highlights. Let's end on a picture that describes my feelings about Duke Nukem: