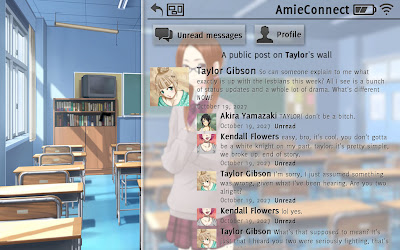 Recently I played Don't Take It Personally Babe, It Just Ain't Your Story and Life Flashes By. They're both made by female programmers whom I admire for making cool things, and I enjoyed reading both... but they just didn't feel like games. In the first game, you're a teacher in a futuristic, anime-inspired classroom, and you get to make six or seven decisions, which can sort of affect the ending. The bulk of the game is reading your students' online interactions and trying to keep that separate from your knowledge of real life. It's in the style of a visual novel; a genre which I now understand a bit better (trying one out in Japanese without being able to read much is super boring). The exploration of LGBT issues in teens was interesting and not something I've seen in mainstream games.

In Life Flashes By, you're a dead woman looking back on her life. I believe the reactions you choose to her life scenes affect the alternate universes you can explore? I didn't experiment a lot with it; as entertaining as the dialog was, I found myself wanting to do game-like things, which I couldn't do. I could only choose the woman's reactions to the conversations and in what order to view the scenes. As a fictional character, the woman is kind of cynical but thoughtful--you know, what every indie game fan aspires to be.

Don't get me wrong! These are lovely, thought-provoking productions, and I would definitely categorize them as ergodic or interactive fiction, but without choices to make that aren't choose-your-own-adventure-like, I don't think of them as games. I don't think it's a binary distinction though; it's definitely a spectrum that contains some subjectivity on the definition of what a game is.

Edit: After chatting about this on Facebook, I think we can still count interactive fiction as games. There are games of luck that seem similar (you're along for the ride and guessing what to do) that are still, definitely, games. But I think I can safely say that these aren't exactly skill-based games (unless your definition of skill includes predicting the author's intentions, which might be possible and interesting).
Posted by Rachel Helps at 11:22 AM