Indiecade 2015 Overview - Lots of cool games in a creative atmosphere

The best part of Indiecade is seeing games and their designers together, and seeing games you can't just download off the internet. There's a playful, creative atmosphere that I really enjoyed. My sister Andrea and I showed Our Personal Space at the gametasting on Thursday. 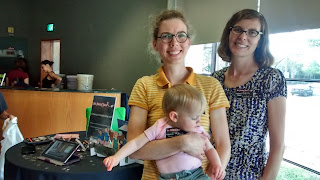 I got the all-access pass so I could see some of my videogame idols (? famous people in games that I like?) at the panels. I'm glad I did that, but if I go again I would just get an exhibit pass (the 3-day  all-access pass was about $500, while the exhibit pass was about $100). Many of the panelists talked off the top of their heads about admittedly interesting topics. Adam informed me that most panels are like that. But I'd rather read and essay or play a game those people spent a lot of time preparing. And if you want to spend money to get close to a writer or artist, that's what Patreon is for. So part of me thinks that panels at conventions are a weird thing that should change into something cooler. But another part of me knows that some people really love panels and it's a good way for conventions to support artists in the industry.

I wish I had been able to spend more time looking at all the games, especially the digital selects and the finalists. And the VR games! I didn't realize the lines for games would be so reasonable! All my convention experience is basically MineCon and the Salt Lake Comic Con, which were both super crowded. At those conventions, the panels were a welcome respite from the chaos of the exhibit hall. But at Indiecade, the exhibits didn't feel chaotic and stressful; they felt welcoming and accessible. So big kudos to the organizers for not overselling their convention and keeping it manageable. 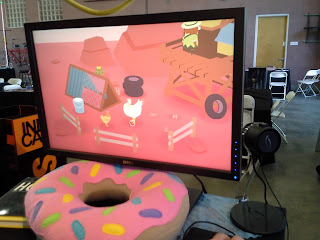 We brought my 16-month-old daughter along. Adam was long-suffering and watched her most of the time. There were a few games she was able to interact with, but she's basically too young to enjoy non-tablet games (although she loves Patatap on the iPad). She liked the fountain near the Culver hotel. There weren't any changing tables in any of the restrooms, except for one in the women's restroom in the IndieXchange venue. She didn't mind having a few diaper changes next to her stroller. Luckily we were able to find a babysitter for night games! 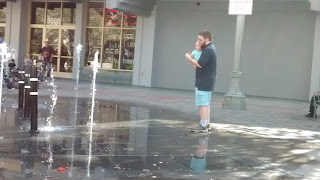 If we can't go next year I want to do my best to replicate the experience at home. I think a party where everyone brings a laptop/phone/tablet with an indie game on it they want to share could be really fun.

This ended up being more of a newsy post. I took photos of my notes and I want to write more about the panels I went to! I definitely have things to say about them.

One thing I've been thinking about is that sometimes I feel like I have to play ALL the games before I start trying to make (another) one. It's like I'm worried that someone else will have already made a game like the one I want to make, and I'll be rude to have made something so similar. But like the games advice presentation was saying, there's value in making games that have already been made. They help you learn about how to make games. I need to worry less about making something original and ground-breaking and more about actually making something.