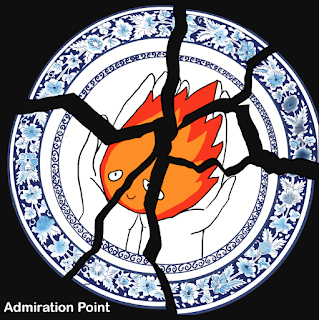 Admiration Point (itch.io; IFComp 2022) is a "FEELINGSART" that I created at the beginning of this year.  I will be discussing my design decisions in-depth. There will be spoilers.
I mentioned in my post-game notes that Admiration Point is inspired by real events. Out of a desire to protect the innocent, I changed a lot of details. But the core anxieties of the many feelings involved in an unwanted work crush--admiration, envy, intellectual kinship, guilt, excitement, and anxiety--are still very much present in the work. I used my writing as therapy to process feelings I felt a lot of shame for. But after writing my shame out of my system, I realized that there is a reason we feel shame for some emotions, because we are not supposed to talk about them. But feeling like I can't talk about my emotions seems to only bring them to a boil! Writing this game was writing therapy for me. I am happy that my temporary insanity has passed and that I managed to sublimate those feelings into something other people have been excited to read.

What was not as successful

I'm going to go into more detail about 1) why I chose for players to be able to decide what to do with their feelings if it didn't affection their future choices and 2) what was wrong with my stat system.

Deciding what to do with your feelings

Your decision about what to do with your crush does not influence your future choice options. So why is it a choice? Deciding to avoid/use/wreck with your feelings is something any person with unwanted feelings will have to decide at some point. Maybe not everyone will sit down and deliberately decide what to do with their feelings, but I wanted the player to make a role-playing decision. In order to play a role, you need to be able to actually choose to act according to that role. I could have eliminated choices to flirt with Sean after choosing the "avoid" route. But choosing to avoid someone, or live with your feelings for them, or to pursue them, is a decision that must be made over and over.

The decision of what to do with your feelings does affect some of the game's evaluations of your decisions to you. Each ending has a little sentence or two commenting on how/if you fulfilled your goal. The game's reflective text is also affected. For example, after the Handmaid's Tale exhibit, you think about how Sean mentioned your work. If you chose to avoid your feelings, your inner voice will say "You hate that you like that"; otherwise it says "Finally!" with some text about how go an listen to his voiceover and admire his work.

Why didn't the stat system work?

My stat system worked in the sense of having players feel like their decisions affected... something. Just like a real weird relationship with your coworker where you start gaslighting yourself into thinking that it's all in your head, but then you can feel the sunlight of their affection, and you feel that maybe you weren't insane that whole time? The spiral effectively conveyed Maria's obsession, but the other variables didn't help players figure out what choices to make in order to see more of the story.

Many players missed the more "final" endings, endings 1 and 2. If you got ending 4 or 5, there is still a LOT of the game you can play. There are some great scenes after ending 3, too. But in order to collaborate with Sean and avoid ending 3, you have to ask him to apply for the grant with you and he has to agree. For Sean to agree to collaborate, his affection for you must be over 4 (which you can check in the alt text of the stats images), and you have to not kiss him. One easy way to get your affection over four is to have lunch with him after he helps you with the mommy blogger motion capture, but he will only have lunch with you if his affection is over 3, or if his alert is lower than 2. You can also increase his affection by having his book in your office when he visits it, by emailing him about Loopscape, or by having dinner with him and the team after the Handmaid's Tale exhibit. (N.B. After writing this postmortem, I subtracted one from the affection thresholds for the lunch scene and the grant collaboration.)

I wanted to make it a little difficult! I wanted to give players the feeling of threading the needle between making friends with Sean and making their attraction too obvious. While it's traditional in dating games to have it be difficult to get the "best" ending, I think I should not have emulated that. Many people play IFComp games until they get to one ending, any ending, and having an early "game over" doesn't encourage further study.

I mentioned in my Skillick's Bride postmortem that I wanted to get testers involved earlier in the process. I did do that! I got 2-3 people to play the first third of the game. Their feedback was really encouraging, but of course, couldn't include the variable fine-tuning that comes after the game is complete. I was able to get 5-6 testers to sit down with my game after it was complete. I made a Google form for them. But I should have asked them what endings they got to and what key decisions they made to try to predict what route most players took (maybe there is an in-Twine way to track player choices?). I should have asked them more specific questions about how they thought the variables worked. Maybe I should have eliminated the variable sidebar completely!? I am still not sure how I would have improved that part of the game.

I am indulging my weird whims in Admiration Point. To have multiple people write in-depth reviews of the game, with several of them really "getting" what I was trying to say, was intensely satisfying. I don't think I've ever received so much positive feedback from anything else I've written. It felt like some of the reviewers understood the problems in my life better than I myself do, just by playing my game. It has helped me feel like I am not alone in having complicated feelings about men because of patriarchy and in enjoying speculative fiction about metadata. If you reviewed Admiration Point, thank you very much! You are helping me to learn how to be a better videogame writer.
Posted by Rachel Helps at 8:09 PM