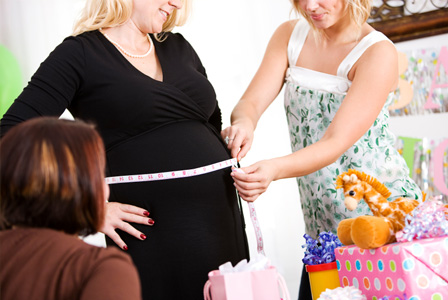 I've been looking for games that are somewhat baby-themed, so you'd play them at a baby shower, but not really tasteless like the one with plastic babies in ice cubes where you want to be the first whose "water" breaks. Here are some variants on parlor games that I made up and pass my taste test:

Baby Alphabet (based on Traveling Alphabet):
The first player thinks of a baby name. Let's say she says "Jenny." The next player has to think of a verb and a noun that begin with "J" that Jenny, as a baby, might do. In this example she might say "Jenny joins jisaw pieces." Then the same player thinks of a baby name beginning with the next letter of the alphabet, like "Kaleigh." You can play that if a player takes to long to think, then they're out, or you could play noncompetitively.

Infantile Poetry (based on Crambo):
Beforehand, pick a few baby-related nouns and a few childrearing questions. Mix them up, and choose two noun-question pairs for every 3-4 people, who are then assigned to write a rhyming poem that uses the noun and answers the babyraising question. For example, you might pick out "stroller" and "Should you let your baby cry it out?" Players have five minutes to write their poem. The sillier the better!

Blind Conditionals (based on Conditionals):
The first player writes down the beginning of an "if" or "when statement" (preferably having to do with childbirth and childrearing). The first player folds down the paper so her statement is not visible, and the second player completes the statement (in the conditional or future tense) without looking at the first part. This game's success depends somewhat on the absurdity of the remarks, so I'm not sure how it would fare as a baby shower game.

Example:
If you're at home and labor starts
spitup will get everywhere.

Sources:
The Games Bible - for Traveling Alphabet and Crambo (amazon)
A Book of Surrealist Games - for Conditionals (amazon)
Posted by Rachel Helps at 7:57 PM