Hello everyone! In gaming I find I tend to cycle between playing lots of games and then not playing games and writing about them a lot. Right now I've been playing lots of games! So here's some games I've been playing in the last month I've decided to start an Amazon affiliate* account, so many links will be to Amazon. Steam has good deals too! :-) Most indie games aren't sold on Amazon, but I'll still talk about them, cause they're also awesome:

Pro Games
Psychonauts -You explore other people's brains in this action RPG from 2005. I love the collection and exploration aspects. Getting different abilities and trying them out in the world is fun too! I want to make a backpack like Rasputin's. The PC port is terrible, but my handy USB xbox controller fixed this problem. There's a lot of superfans of this game, which kind of turned me off for a while, but then a game scriptwriter, Rhianna Pratchett said it was like her favorite game ever.

Catherine -A puzzle/dating sim... I really like the moving-block puzzles, but I find the boss levels kind of ugly and unfun. I kind of wish the story were more upbeat (it's about a man cheating on his girlfriend), but at least it's weird enough to be unpredictable, and the anime cutscenes look good too.

Persona 4 Arena -I suck at fighting games, but luckily visual novel mode (yep! visual novel + a few fights) is easy enough for even my frenzied button-mashing. Some of the writing is a little lame but the fighting system has plenty of depth if I'm willing to put in the time to learn it (I might not be). I admit that I just got this game because I want to be in on all the Persona fandom... though I have yet to beat Persona 3 (I'm in September now!). Sound Shapes -Really cute rhythm platformer for the Vita. Okay, you don't really have to have any sense of rhythm to play it (mostly timing... does that count as different?), but it's themed around collecting notes in a song that plays as you play. You can build your own levels too! Reminds me a little of Mutant Space Blobs Attack only more arty. Indie Games
Long Live the Queen -A time management stat-cruncher! I loved the idea but I found it wasn't as flexible as Princess Maker 2 because it had kind of a story. I really liked how stats affects how you reacted to things, and how some of the classes (like foreign policy, a subcategory of history) seemed to be... really relevant for a queen-in-training. I might give it another go; the mood bonus system for learning actually requires quite a bit of planning.

The Sea Will Claim Everything -I've just been playing the generous demo but the free The Fabulous Screech will give you a good idea of the unique art style, point-and-click mechanics, and zany, Pratchett-like humor in a short, browser-based game. I love reading through the book names for gems like The Importance of Puns in the Release of Magical Energies, by Magister Erasmus of Zauberberg and The Voyage of the Darwin by Peter S. Beagle. Lana Polansky has played more of it and wrote a review praising its slower pace and political commentary. 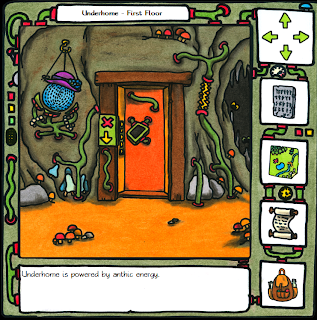 Run -This experimental game has a soundtrack that's still running through my head! The story is a little weird, but I like that developers are messing around with how minigames can connect to each other.

What games are you playing this summer? Did you really hate a game I liked? Let me know in the comments!

*The deal with Amazon Affiliate links is that if you click an affiliate link, I'll get a 4% commission of anything you buy in the next 24 hours. I have no idea if it will make me any money, but I think it's worth a shot.
Posted by Rachel Helps at 12:52 PM