Anyone can make a video game, and it is a little harder than drawing a doodle. But amateurs should make games, because it's fun and fulfilling, and because we need more diversity in video games than the cautious, often predictable games big studios put out. These are Anna Antropy's ideas in Rise of the Video Game Zinesters: How Freaks, Normals, Amateurs, Dreamers, Dropouts, Queers, Housewives, and People Like You are Taking Back an Art Form.

Anthropy's book is related to academics, but it's written in an accessible style. The chapters don't build on each other for a linear, climactic thesis, but highlight different aspects of the history and present of self-published games and mods in a collage that makes for a bigger-picture understanding. Anthropy tells her own story of dropping out of college, struggling for a while, but succeeding to make games by herself like Lesbian Spider-Queens of Mars. 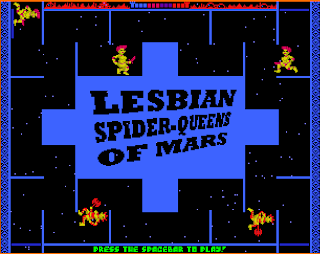 Her passion and self-confidence are infectious. The last section on how to make a game was filled with (what seemed to me, the currently non-programmer) excellent advice on storytelling and just getting something on screen.

I liked this book so much that it's hard for me to criticize it, but there were some things I found puzzling. None of the images had captions, though their relevance was usually intuitive. I was also annoyed by the inclusion of a certain ubiquitous Tolstoy quote. The history chapter seemed linear and obligatory, but paid special attention to the role of deep-pocketed publishers and shareware entrepreneurs. The book succeeded in heightening my awareness of how games can be so much more than men shooting things, and in inspiring me to make my own game (which I might describe as craptastic, and I'm proud of it!). If you don't read this book, at least go out and make a video game! Set aside two hours and just make something in Scratch (that's what I did)!
Posted by Rachel Helps at 10:01 PM