The Developmental Stages of Video-game playing 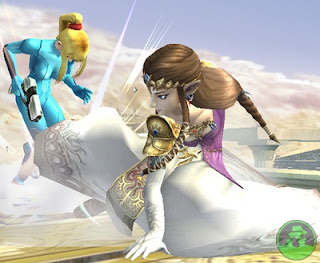 I brought along DDR and Super Smash Bros Brawl to my family reunion and I was surprised by how interested my young cousins were. I also noticed that some of them really wanted to play, but they didn't do very well. So, here are the developmental stages of video-game playing, as defined by me and based on my observations of children playing SSBB. They occur in adults rapidly when learning a new game, but in kids it gets pretty obvious. Before the exploration stage, you can give a child a dummy controller and they will be perfectly content to watch and pretend to play. They honestly don't know the difference.

1. Exploration (ages 3-5ish): The player recognizes that he/she controls an avatar on the screen, can distinguish this avatar from others. Concept of the game may be limited to "cool I can move around." In SSBB, girls in this stage placed utmost importance on who their character was (i.e., Princess Peach or Zelda) and how it was colored.

2. Competition (6-12ish): The player knows when she is winning or losing, and wants to win. In SSBB, this manifests itself as directed attack behavior,  revenge on winning players, and a desire to know the rules and how to get better. Most gameplay happens at this level until the player has some expertise.

3. Challenge (12 and up-ish): The players still wants to win, but wants a challenge--simply winning isn't fun enough. My older brother gave himself a 125% handicap to make it fun to play with younger children. My sister-in-law likes playing against three computers on their hardest mode. It's the potential for challenge that can keep people playing (like the 3-heart-no-sword Ocarina of Time challenge). I'm fascinated by the ways people make games harder for themselves to make them more entertaining. I'm also impressed with how good SSBB was with kids who were in different stages of gaming.

I don't tend to get to the challenge stage in many games. I think I've feebly attempted to collect all the pokemon (back with blue when it was feasible), and I've tried for 100% completion in some Little Big Planet levels. Have you done any crazy things to make games more challenging?
Posted by Rachel Helps at 2:50 PM